Stewart Hotel NYC Review
Back in June, for my boyfriend Jeff’s birthday, we decided to spend the weekend at a hotel in NYC called Stewart Hotel. I found a pretty nice deal on Groupon and we packed our bags for a weekend in the big apple! To be honest, we had a few moments there that left a little to be desired, but overall, I’d say we had a great experience! Today I’ll be sharing my honest review of the hotel, talking you through the good and the bad, so you can make your own decision next time you come to New York! 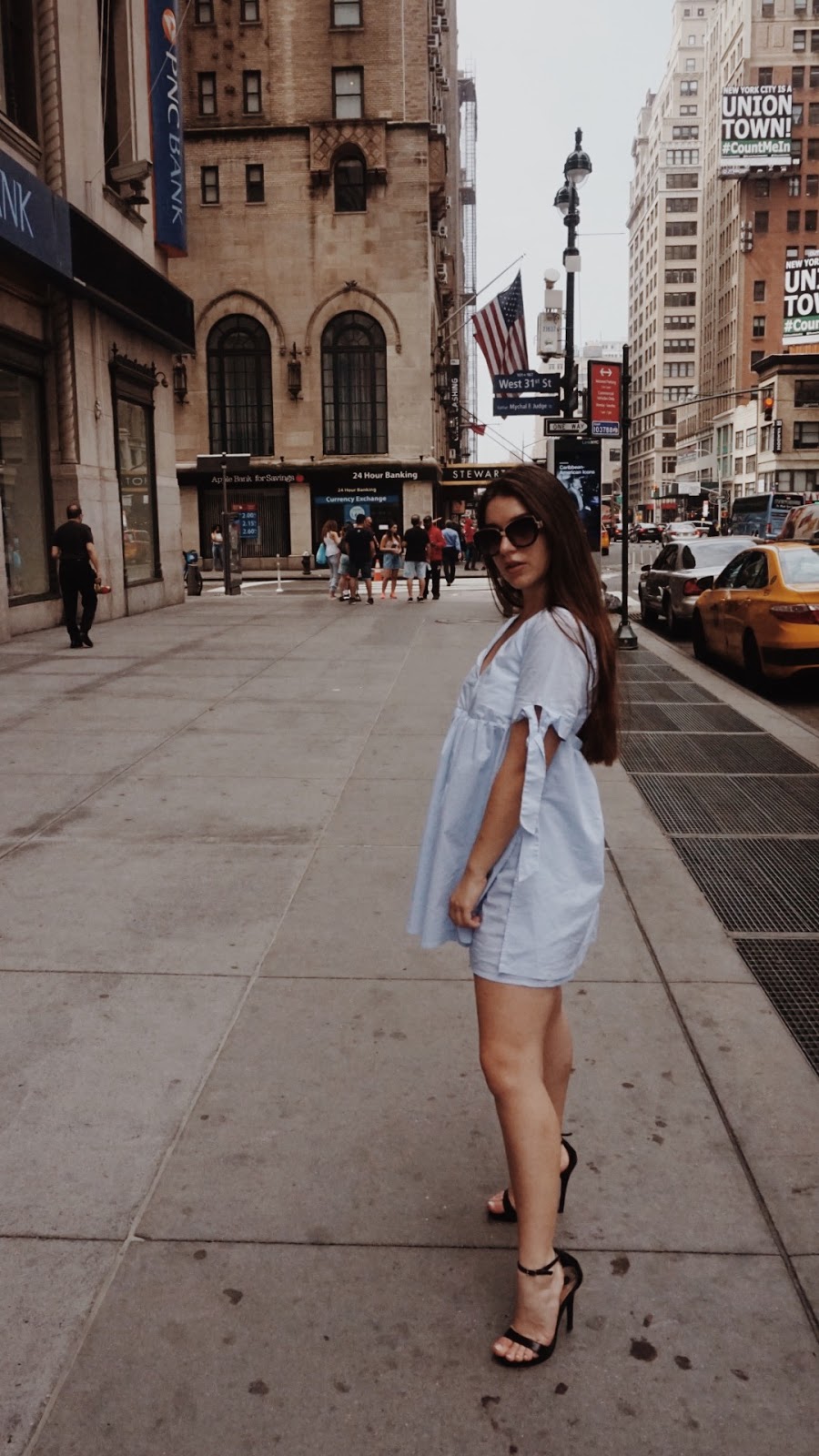 WHY WE LOVED THE STEWART HOTEL-

THE LOCATION:
The first great thing that we loved about Stewart Hotel, was how close it was to the Penn Train Station! When we left the station, there was no need to call for a taxi or an Uber because the walk brought us there within minutes! That’s a major plus when traveling, especially around New York where taxi’s and Ubers can get pricey but the subway isn’t always the most convenient. If I can walk somewhere, and quickly, I’m a happy girl! (especially when I’m wearing heels just as tall as the New York skyscrapers.)

The location was also great because it was minutes from Times Square, perfect if you like the real hustle and bustle of NYC. It was also a quick drive to the heart of the calmer Chelsea area, one of my personal favorite places in Manhattan! This made it easy to get to attractions like the High Line, the Flatiron Building or Bryant Park. 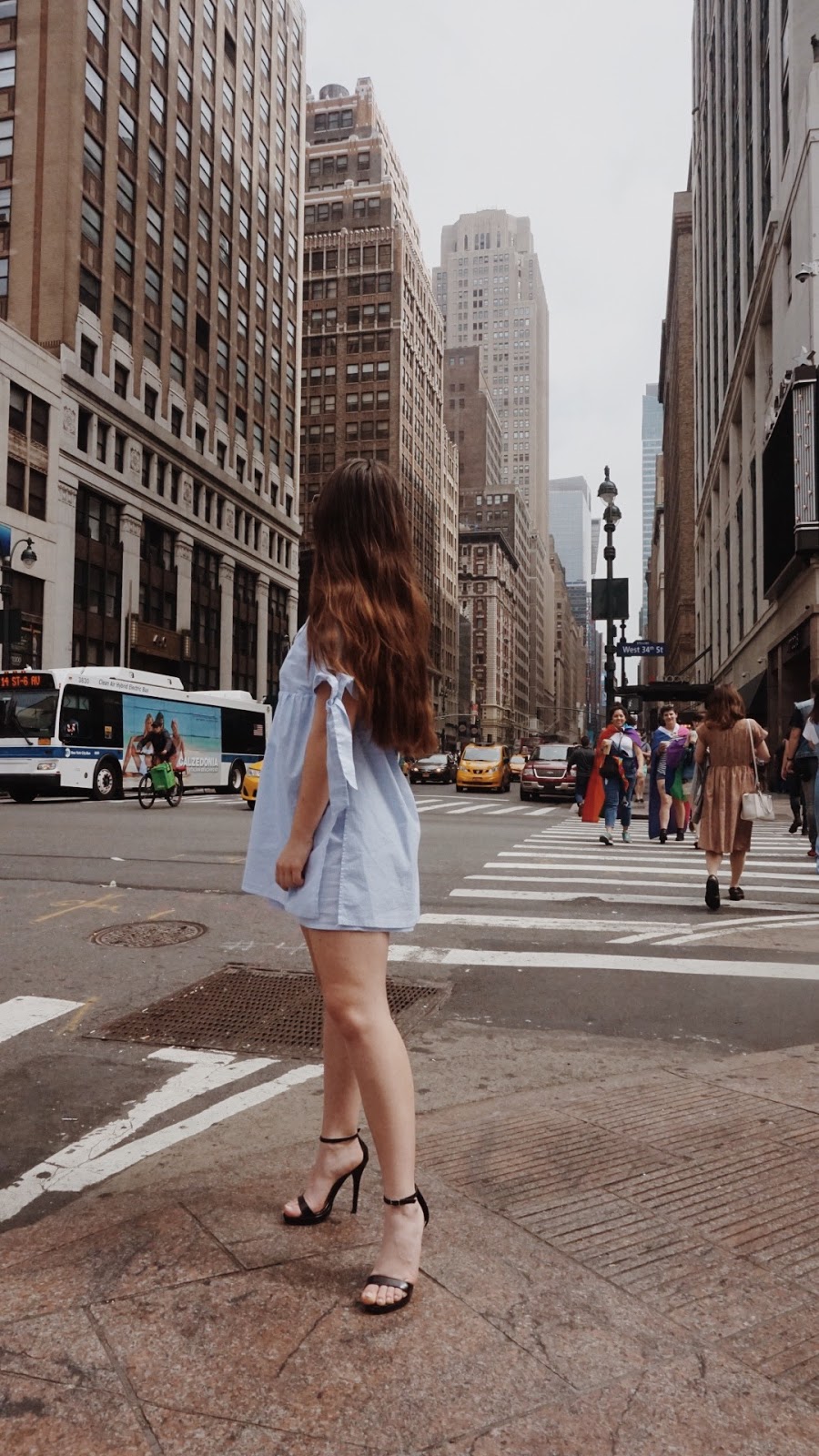 THE NEIGHBORHOOD:
The surrounding area of the Stewart was another win! There were plenty of delicious restaurants right around the block or just a short walk away. We personally fell in love with places like The Little Beet, by Chloe and OF COURSE Cha Cha Matcha which I recently featured in my blog post about finding jeans for a big booty! We got into the city on a Friday night and noticed that there was a really lively crowd out and about. I’m personally love going wherever the action is, so I liked that aspect! It wasn’t the craziest of areas though, and it certainly felt safe where we were. 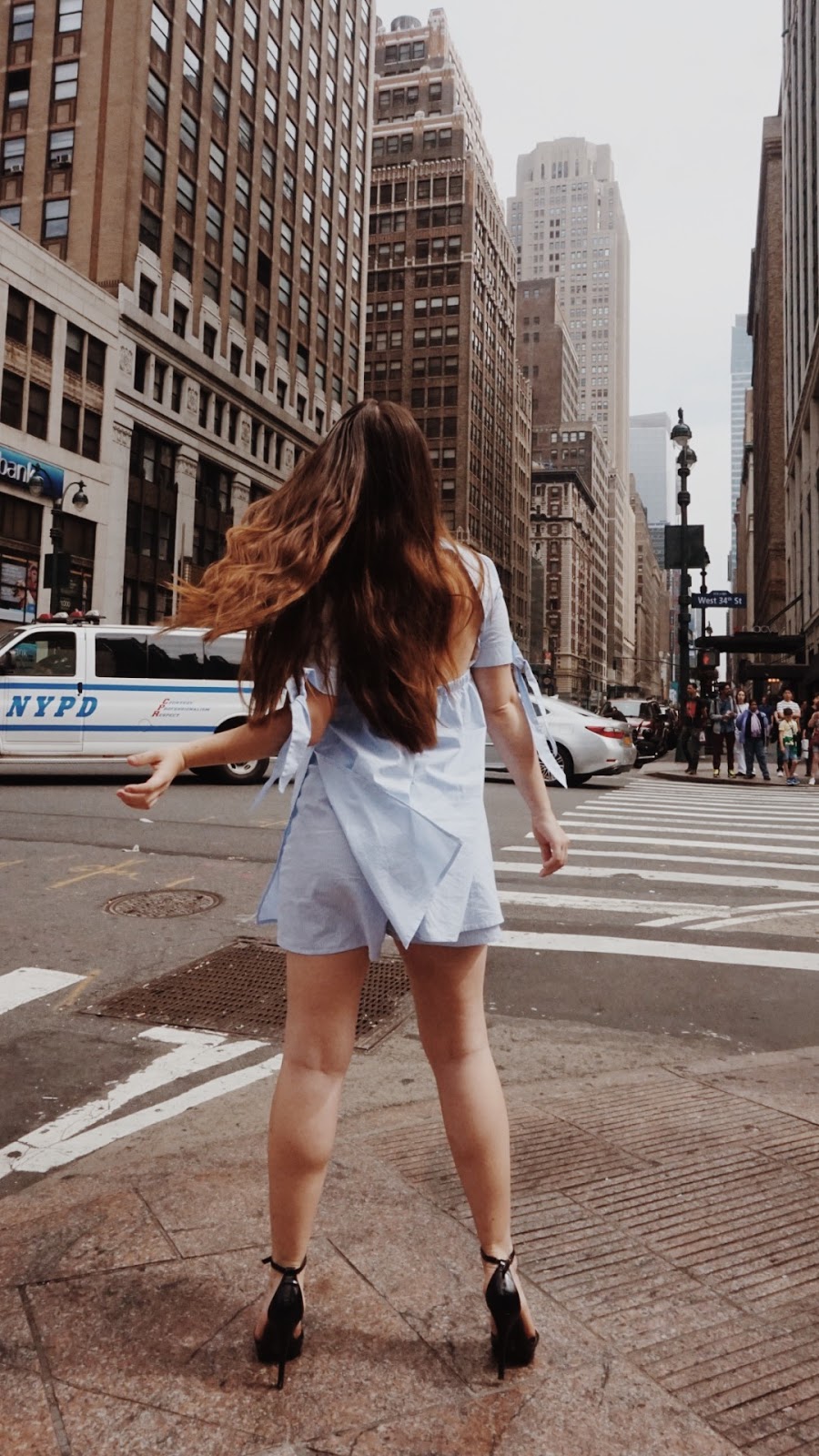 One of the things that attracted me to the Stewart Hotel right off the bat was the amazing decorations! As you first walk into the hotel, the lobby is pretty stunning with grand, high ceilings and seating areas that look more like artwork than a place to sit down! And everything from the hallways to the elevators felt wonderfully luxurious.

Then we got into our room! Huge flowers covered one of the walls from floor to ceiling and that was an extra little touch that Jeff and I loved! 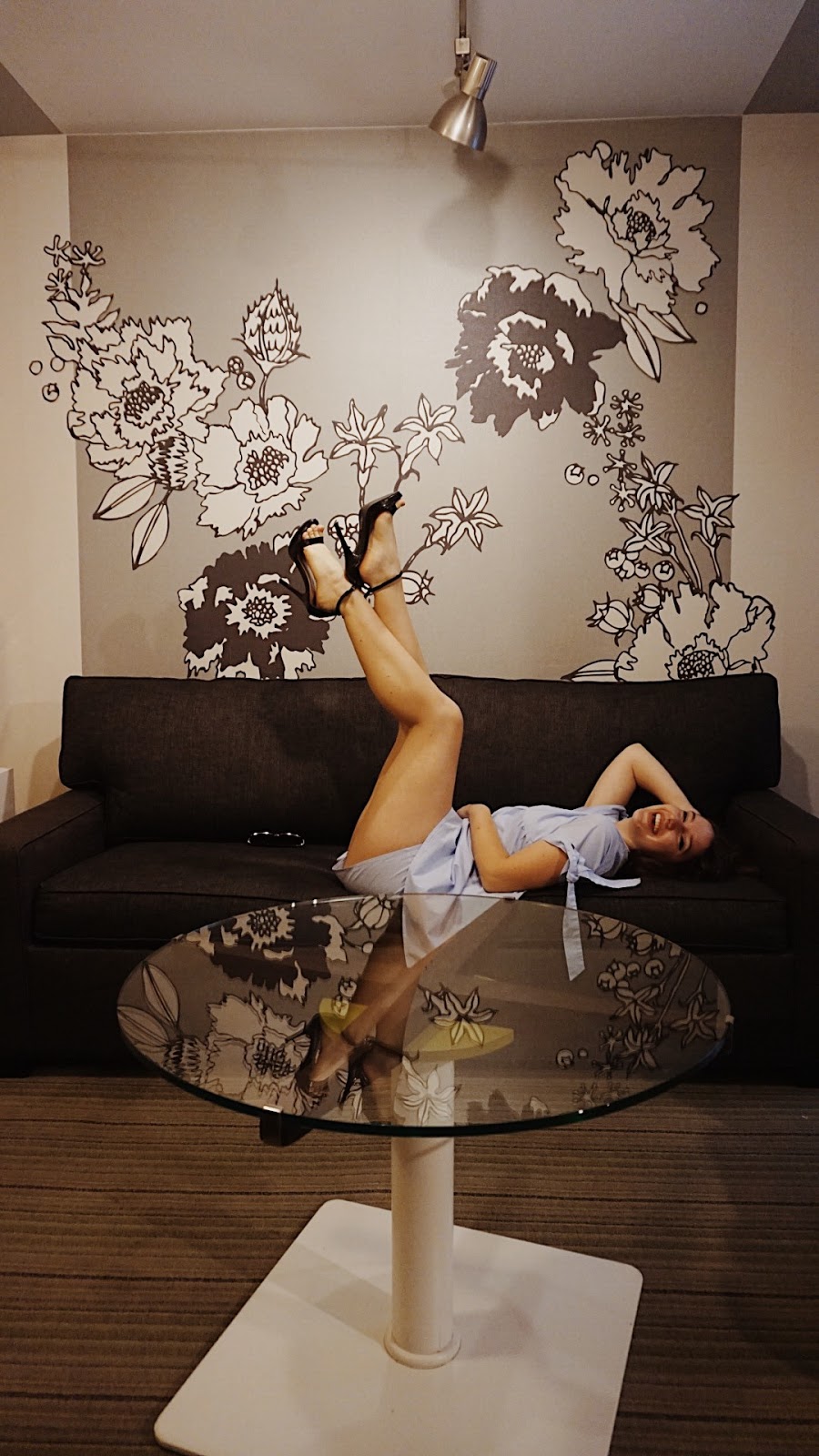 There were a few issues with our room to discuss but before we get to that, there was plenty we loved about it! First off, the size was pretty great for what we paid for! With the Groupon it came to about $150 a night, and in New York City, especially where we were, that’s a pretty nice deal! With that said, often times you pay that price or more and get a bed crammed in so tightly to the room, you wonder how they even managed to get it in there. But this room was HUGE! We had a little kitchenette, a giant bed, 2 tv’s (not that we used them) and a living room area!

We didn’t get a great chance to experience the Stewart’s restaurant but I think it’s worth mentioning that they have one! We did, however, head over to the bar before we left just to relax a bit before leaving. It was a really cool set up with bright neon lights and great service! Again, we were so busy, I wish we had more time to check everything out, but from what we saw of it, we were impressed! 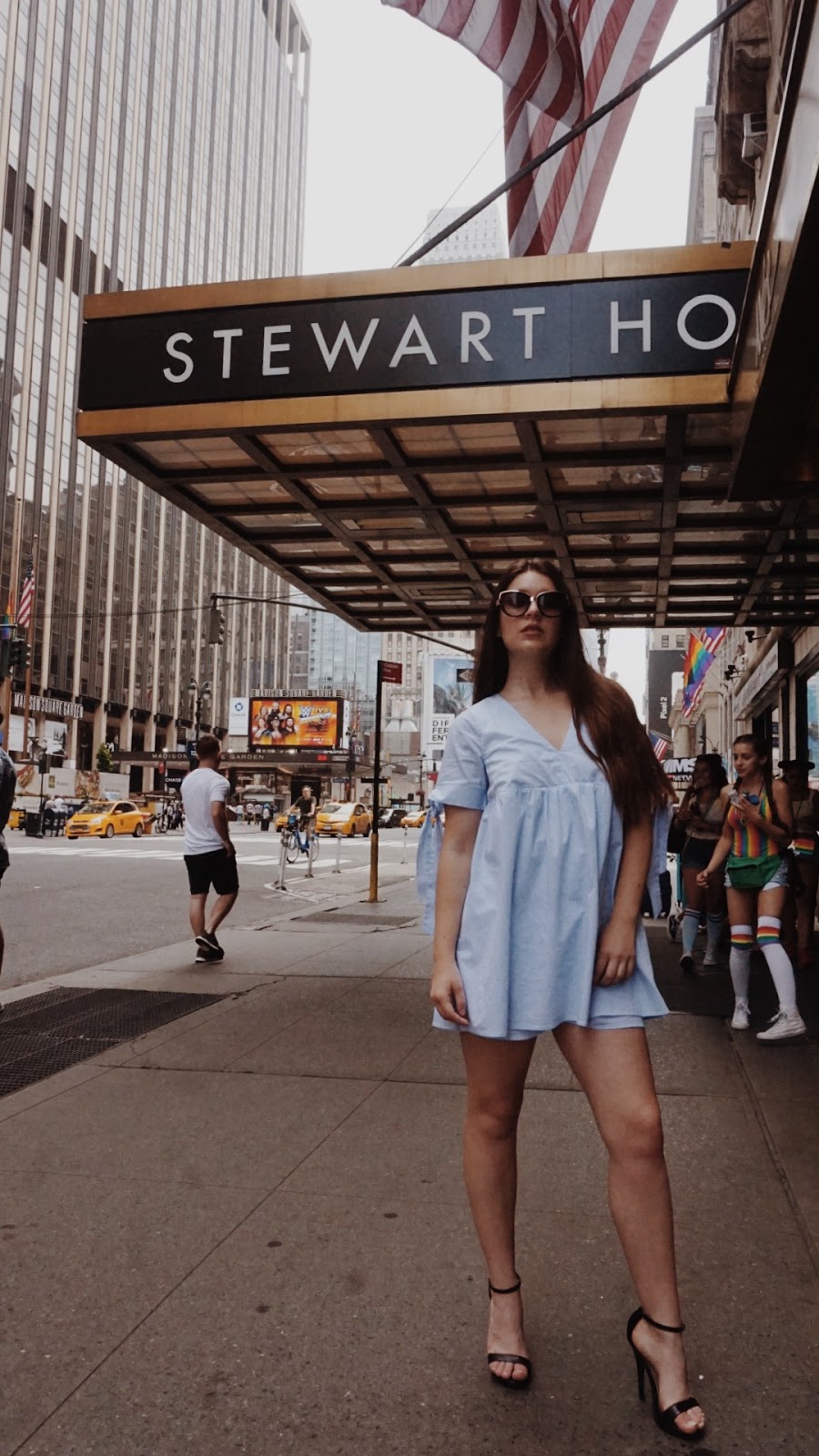 So, as much as we liked our room, there was one issue that we had to resolve. On our first night there, the window air conditioning unit started to make a really high pitched squeaking noise that woke us out of our sleep. It wasn’t the biggest deal, but we asked for help resolving it the next day and a very sweet man came up to look into it. He played around with some buttons and though it didn’t seem like he did much, the squeaking stopped and he offered us a bottle of wine for our troubles! We were very grateful!

And then not 10 minutes later, the noise started up again. 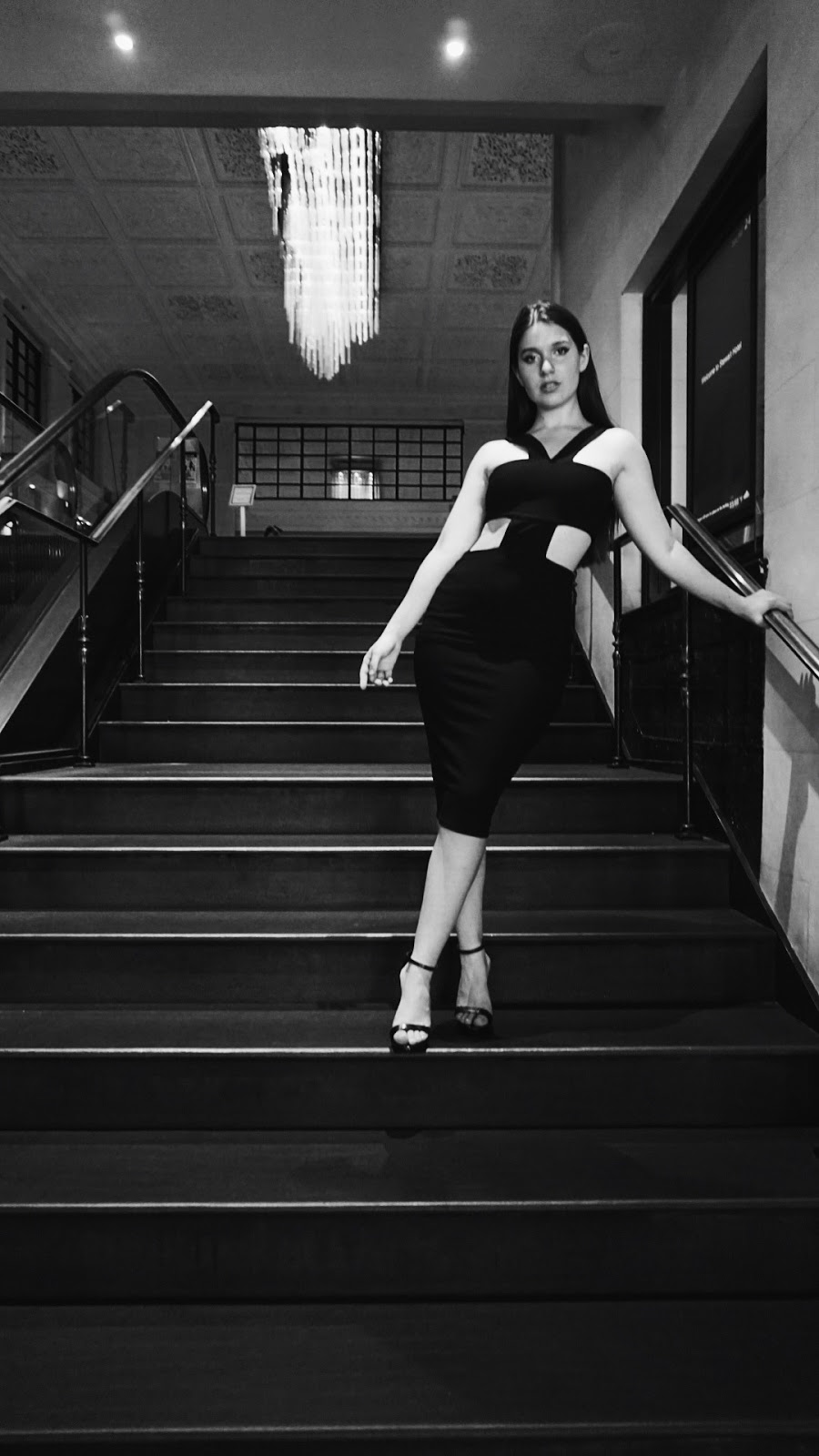 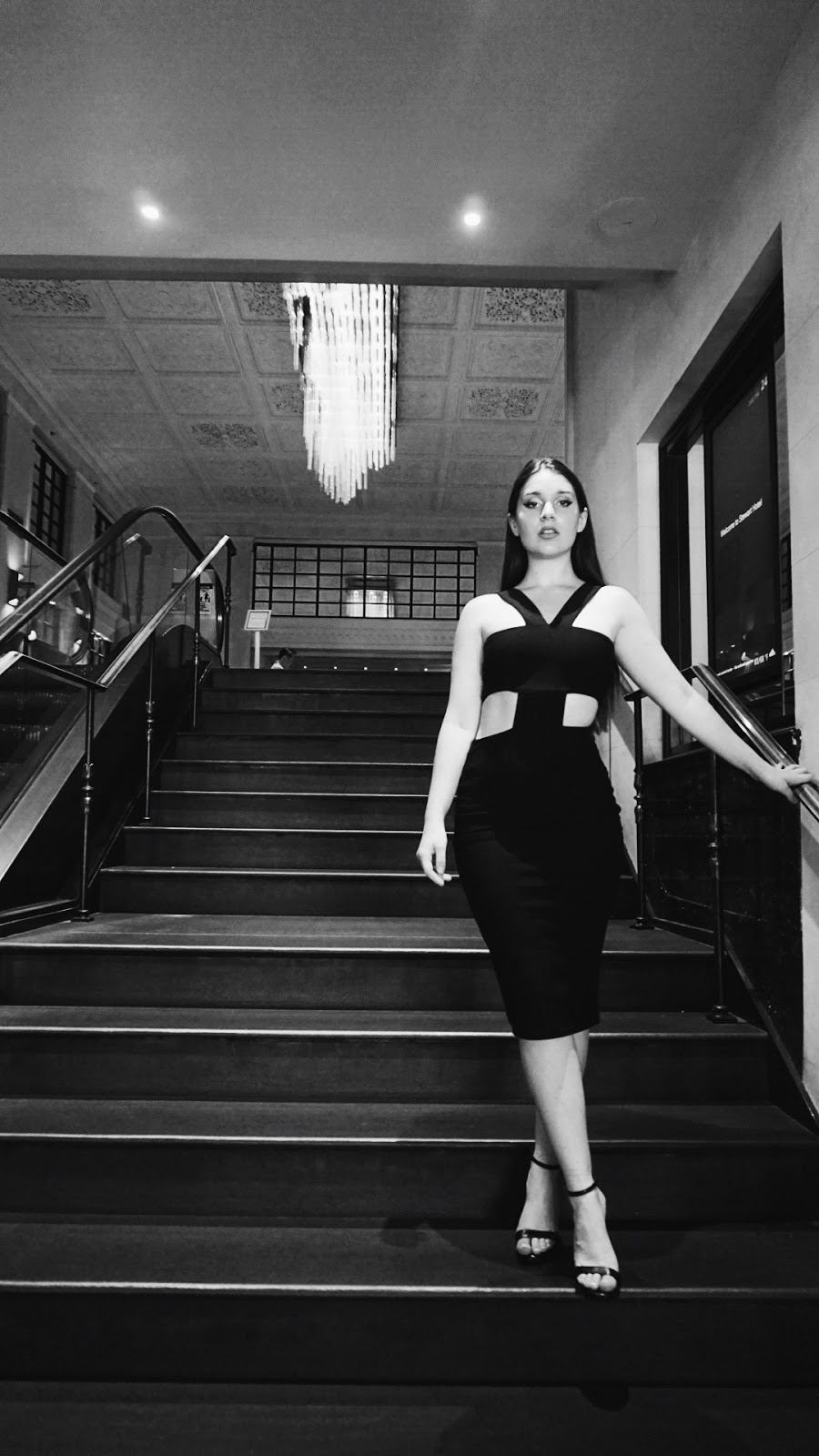 We were about to hit the town for dinner so we decided to ask about it again later when we got back. That night, a different man came to help us out. This guy hardly did a thing. I’m not exaggerating when I say he hardly even touched it before saying basically there was nothing he could do about it. He offered us a bottle of wine as well and then promised he’d have someone call us within the hour. No one ever called.

By this point we were ready to leave and the issue had never truly been resolved. Not to mention, we were a little annoyed that we’d waited on someone calling us and never heard back. But in the end, after we explained our issues to the manager, we were given another free bottle of wine, and they took a bunch of fees off our bill, including the room service we ordered the morning before. I don’t expect every situation to be perfect. Accidents and mistakes happen all the time, but how an establishment responds to such mistakes goes a long way in terms of how I feel about them ultimately!

In the end we were happy with the way they compensated for the mishaps and the pro’s far outweighed the cons! The next time you’re in NYC, I’d recommend giving the Stewart Hotel a shot! Just don’t be afraid to politely speak up if something is going wrong!

So what do you think? Would you give the Stewart hotel a shot, or do you have another favorite place to stay in New York City? Let me know down below!

Disclaimer: Some links are affiliate links. This means that I get to continue making fabulous content for you by making a small commission off of anything you happen to purchase through me, at no extra cost to you! Thank you! 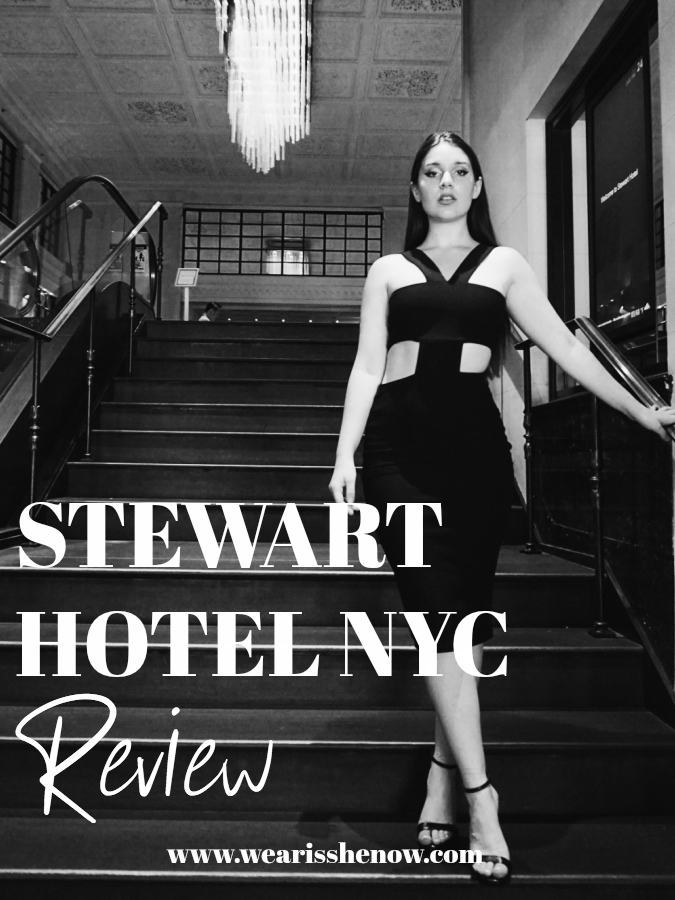